Over the next century, sea level rise (SLR) in the Los Angeles region may increase 5-24 inches by 2050 and up to 66 inches by 2100. A new study by USC assesses the potential impacts of SLR on the City’s most vulnerable communities and infrastructures in case of a 10-year or 100-year flood under not only current conditions, but in a 0.5 meter and 1.4 meter SLR scenario. Entitled Sea Level Rise Vulnerability Study for the City of Los Angeles, the study was presented Tuesday, January 7, at the Annenberg Community Beach House in Santa Monica. Here are a few highlights of the presentations.

Dr. Reinhard Flick, Principal Oceanographer for the TerraCosta Consulting Company, said flooding damage wouldn’t be caused by mean SLR, but by big waves during high tides. Total maximum water level is most damaging and leads to wave damage and coastal erosion. Of major concern is Pacific Coast Highway which cannot be moved.

Brian Holland, Climate Program Director of ICLEI (International Council for Local Environmental Initiatives), said the most vulnerable sectors are waste water and storm water facilities. Because they’re at low elevations, they’re susceptible to inflow from both flood water and ground water. When unsealed sewers get filled up with flood water, they back up and overrun. The same with pump stations – they have to be located at very low elevations because the whole point is to pump water up. If those are impaired, so goes public health and water quality. Similarly, storm water systems are not sized adequately to accommodate the floods of the future, in particular the coastal interceptor sewer which runs along the coast through Venice/LAX sub-area.

Also, ecosystems such as the Bellona Wetlands are highly vulnerable. As sea levels rise, the precarious dynamic of salinity, tidal influence, and the species that live in the wetlands can get off balance quickly. With urban development all around it, the wetlands have nowhere to migrate.

Less vulnerable sectors include potable water, the port and energy facilities. Potable water use pressurized systems so they’re less susceptible to inflow of flood water. The issue is being able to access the pipes during flooding, as well as erosion and the undermining of the structural integrity of the water system. The port is fairly hardened since it’s at a high elevation, so it should be safe in the mid-century time frame. The same goes for energy facilities – in general they’re built at higher elevations. The exception there is the Haynes Generating Station in Long Beach which is a little bit more vulnerable. 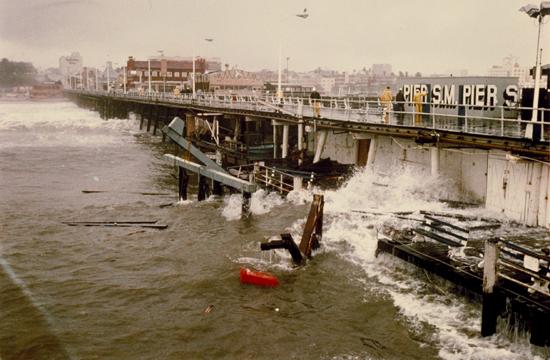 Two violent storms in 1983 destroyed over a third of the Santa Monica Pier.

Parks and open space have fairly low vulnerability, largely because of the adaptive capacity of these systems. They have passive uses, and infiltrates flood water if affected and can rebound quickly. They’re made to withstand weather impacts. The exception are the beaches; in particular Venice, Dockweiler, and Cabrillo Beach, all of which are going to experience more erosion as sea levels rise.

Looking at land use and transportation in San Pedro, Venice and Pacific Palisades, Venice is the most affected. Under the 2100 projections paired with flooding events, high water, and El Nino wave run-ups, Venice will get extensive flooding, so homes, business, transportation infrastructure there will be very vulnerable starting mid-century.

Dr. Dan Wei, Research Assistant Professor in the Price School of Public Policy at USC, said the majority of the damaged buildings will be residential, with wooden structures at most risk.

Dr. Patrick Barnard, a coastal geologist with the USGS Pacific Coastal and Marine Science Center in Santa Cruz, was more concerned about a foreseeable change in wave approach, rather than wave height. Waves coming from the south would mean more damage for southern facing beaches. He was also concerned about salt water intrusion into coastal aquifers.

Hilary Papendick, a Coastal Program Analyst with the California Coastal Commission, said areas that now flood will be permanently inundated, and low lying areas will have water quality problems as water drains back into the ocean as flooding recedes. She said the CCC’s Draft SLR Guidance Document used the best available science, the National Research Council Report’s sea level rise projections for California, as a starting point for looking at SLR. Accordingly, SLR south of Cape Mendocino is rising at a faster rate than the region north of Cape Mendocino, because of the vertical land uplift along much of the Cascadia Subduction Zone. By the year 2100, SLR is projected to increase between 1.5 and 5.5 feet in the area south of Cape Mendocino, and a third of a foot to less than 5 feet north of Cape Mendocino. The exception is Humboldt Bay’s North Spit which “is subsiding and experiencing the highest rate of sea-level rise in the state: a rate of 18.6 inches per century, according to the Sea-Level Rise Science section of the CCC guidance document. The NRC report is also the subject of this blog’s entry, Sea Level Rise in Southern California.

The California Coastal Commission is seeking input on their Draft Sea Level Rise Guidance Document. The deadline for comments has been extended to February 14, 2014. You can submit comments by email to [email protected] or mail them to:
SLR Working Group
45 Fremont St.
San Francisco, CA 94105