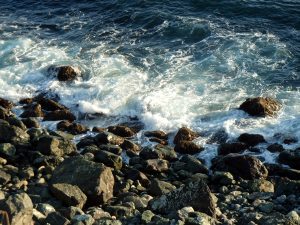 Near Bixby Creek Bridge on PCH

From southern British Columbia to the Baja California Peninsula, winds blow southward along the coast. Combined with the rotation of the earth, these winds cause the surface layer of the ocean to move offshore. Seawater then wells up from beneath the surface to replace the water that was pushed away. When this deep cold water arrives at the surface, it brings nutrients which are more abundant at depth than they are at surface. The sunlit nutrients stimulate blooms of microscopic phytoplankton—the base of the marine food web—which propagate up the food chain to zooplankton, filter feeders, fish, marine birds, top predators, and marine mammals.

This is the process of upwelling in the California Current, a coastal upwelling zone which exists along the edges of eastern boundary currents in the northeastern Pacific. Its abundant concentration of phytoplankton renders it among the most productive of the world’s marine ecosystems. Many species that rely on its food source live here year-round; others migrate from quite a distance—like leatherback turtles from Papua New Guinea, shearwaters from New Zealand, and tuna and loggerhead turtles from Japan.

The first hypothesis about how upwelling might be affected by climate change was put forth in 1990 by Andy Bakun, a professor of marine biology and fisheries at the Pew Institute for Ocean Science. He proposed that increasing greenhouse gas concentrations would strengthen winds in the California Current and similar upwelling systems: the Benguela Current off southwestern Africa, the Canary Current off northwestern Africa including its northern extension off the Iberian Peninsula of southwestern Europe, and the Peru-Humboldt Current off western South America.

During the warmer months, Bakun observed that air over land warms more rapidly than air over the ocean, which causes the low pressure system over the land to intensify relative to the high pressure system over water. The increasing pressure gradient between them results in stronger upwelling-favorable winds. Hence, greenhouse warming leads to an acceleration of coastal upwelling.

Since then there have been several studies assessing trends in upwelling-favorable winds, with mixed results. However in 2014, a coherent pattern emerged. William Sydeman, president and senior scientist at Farallon Institute for Advanced Ecosystem Research, produced a meta-analysis of published studies, each with more than 20 years of observational or model-derived data. Results showed this upwelling intensification trend is observed at higher latitudes, specifically the California, Benguela, and Humboldt upwelling systems, which he thought “may reflect stronger warming trends observed toward the poles than the equator.” 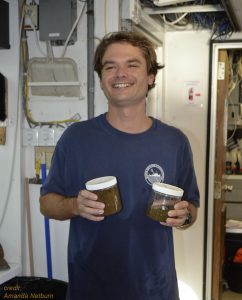 A 2015 study confirmed these findings and projected the trend would continue. Ryan Rykaczewski, a fisheries oceanographer at the University of South Carolina, compared estimates of historical greenhouse gas concentrations from 1861-2005 to projected greenhouse gas concentrations from 2006 to 2100 if global temperature rises 4 to 5 degrees Celsius. That’s the “business as usual” scenario, which is the worst trajectory and the one we’re on. His analyses of 21 coupled atmosphere-ocean general circulation models showed increased coastal upwelling toward the pole and decreased upwelling toward the equator. 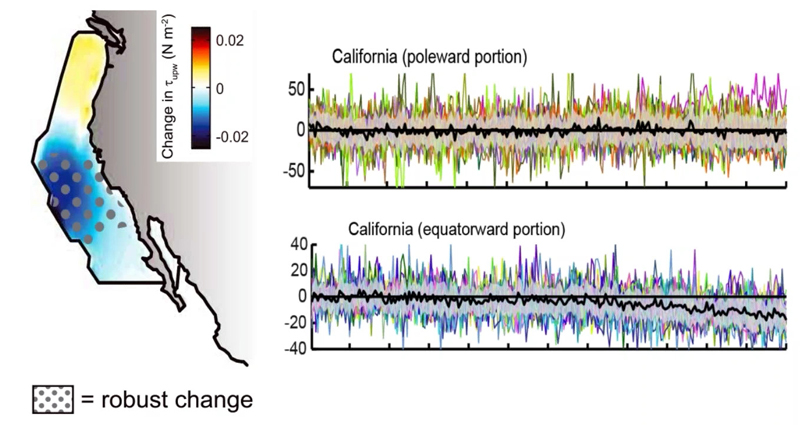 What that means for the California Current is shown above, in the outline of the west coast on the left, with projected changes in upwelling illustrated in color. Yellow and red indicate increased upwelling, which is what Bakun’s hypothesis says we should expect. Blue means decreased upwelling. The dotted areas are where the changes are large enough that it’s statistically significant. In the north there’s little to slightly positive change, but south of the California-Oregon border there’s decreased upwelling. You can also see it in the plots to the right—the colored lines represent different models and the thick black line is the mean of all those models.

The scenario is as Bakun had described: During the warmer months, a strong pressure gradient forms between the continental low pressure system over California (and the desert southwest) and the North Pacific high pressure system that is found offshore of California. By Bakun’s account, this should increase upwelling-favorable winds everywhere. But Rykaczewski suggested two elements were absent from his hypothesis:

1. The influence of humidity on atmospheric pressure—that is, pressure is a function of temperature and humidity, not just temperature alone.
2. The potential movement of the pressure systems.

“It’s the movement of the high pressure system that is the most obvious and consistent of these elements, at least in the projections of climate models,” he said. “The actual reason that the high-pressure system moves north is still an area of scientific research, but likely has to do with the increased heating in the tropics and the greater convection that is stimulated as a result.”
Could the ridiculously resilient ridge (RRR) put the brakes on the North Pacific high pressure system? The RRR is an area of high atmospheric pressure that has disrupted the North Pacific storm track since 2012. While it is typical for a high pressure ridge to form over the West Coast during winter, which explains why eastward-moving Pacific storm often veer north before reaching California, this ridge has become increasingly persistent and pronounced since 1948.

Rykaczewski did not think that the presence of the RRR would prevent movement. “Rather, I think the question is whether the presence of the RRR is somehow related to the poleward movement of the North Pacific High overall,” he said. “The scientific jury is still out. The complication is that things like the RRR are episodic and last for a period of months, while the shift in the high pressure system is something that occurs over a period of several decades.”

When stronger upwelling upwelling-favorable winds occur, they bring a surge of nutrients to surface waters. But they can also harm marine life by causing turbulence in surface waters, disrupting feeding and worsening ocean acidification. That’s because upwelled water is naturally rich in carbon dioxide. The earth’s oceans have already absorbed about a third of the CO2 that humans have emitted into the atmosphere since the beginning of the Industrial Revolution. This increased CO2 causes upwelled water to be more acidic, threatening calcifying species, including oysters, clams, sea urchins, shallow water corals, deep sea corals, and calcareous plankton. Also, when there’s an abundance of phytoplankton, those that are not eaten eventually die and float down into deeper waters, where bacteria use available oxygen to decompose them. When too much oxygen in the deep waters is used for this bacterial decomposition of the phytoplankton, the result is a condition known as hypoxia. This could harm bottom-dwelling marine life, shrink open-water habitat for top predators, and increase the number of invasions by hypoxia-tolerant species like Humboldt Squid, a species thought to have benefited from an expansion of hypoxic waters and which rapidly expanded its range into the northeast Pacific Ocean in the late 1990s.

On the other hand, weaker upwelling may limit nutrients at the surface, negatively affecting primary production. Winters with extremely weak upwelling are associated with slower growth in fish and lower reproductive success for seabirds.

However, Rykaczewski’s projections show the opposite will happen. This figure shows the same changes as the previous figure, but as a function of the month of the year along the horizontal axis and the latitude along the vertical axis. In the central and Northern California coastline, models project intensification in April and May (note the strong upwelling beginning in April, which may indicate a longer upwelling season). But south of the 40th parallel (Mendocino) you see a weaker upwelling in late July to early August at the peak of the upwelling season.

A seasonal-scale change can predict animal distribution as well as survivability. For example, in 2005 central California seabirds and rockfish as well as Oregon zooplankton were hit hard by a weak and delayed upwelling. It was particularly hard on species whose reproductive cycles depend on early upwelling, rather than the cumulative amount. The northern portion of the California Current had one of the most delayed onsets in the 40-year record, and resulted in the reproductive failure of Cassin’s Auklet.

It can take a long time for the signal of a trend to be greater than the natural variability that happens on shorter time scales. Anthropogenic changes in upwelling will emerge primarily in the second half of the century. Still, it is apparent that ecosystems respond to even small changes in average conditions of pH and CO2, even within the context of a larger range of natural variability. Even more worrisome is that climate change is likely to produce a combination of stressors for which we may have no reference.