Concrete, poured over the riprap revetment at the base of the seawall, were both in response to the severe damage to the wall caused by the El Niño of 1997-98. 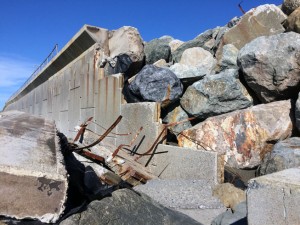 Note the rusted metal straps that were used to hold in place the concrete slabs that make up the wall itself.

A distant view of the breach in the Beach Boardwalk seawall. It was originally built in two phases, from 1985 to 1988. 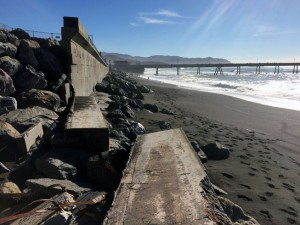 Broken seawall, with the Pacifica Pier in the distance.

Sandbags guard the front yard of a home along the Beach Boardwalk in Pacifica.

The cordoned-off area around the breach in the Beach Boardwalk seawall. There isn’t much room to spare from seawall to front door. Note the sandbags along the front of the green house on the right. 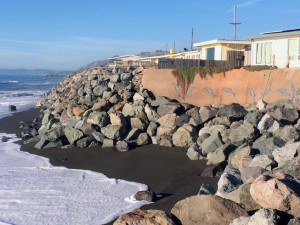 On a lighter note, if you have to build a seawall, you might as well decorate it with some dolphins.