When this home, and the ones beside it, were originally designed and built, sand buried the entire foundation up to the bottom of the house, and the stairs led right onto the beach. Today, much of the sand is gone, the foundations of the homes are fully exposed and the stairs now lead to an eight-foot drop down to what is at times ocean water instead of beach.

Back in the 70’s, Broad Beach in Malibu used to be about 100-150 feet wide. Since then, the 1.1-mile oceanfront – lined with homes of the rich and famous – has become eroded by winter storms and high tides. When my friend, Devon Low, and I went there this past April, it seemed like it was ready for a name change – maybe something like Slim Sand.

At high tide, waves wash over the bottom steps.

Cliffs and bluffs, the dominant feature of the west coast, have been slowly retreating for thousands of years. Their rate of erosion depends on what they are made of as well as external forces. Cliff and bluff retreat happens periodically and suddenly from a variety of forces. Large blocks fail under heavy rainfall, large waves, or earthquakes. In steep, mountainous areas, failure is often through large landslides or rock falls, usually driven by excess or prolonged rainfall during the winter months. One example is the slide that occurred in November of 2012 when a 600-foot section of Paseo Del Mar in San Pedro below the White Point Nature Preserve suddenly dropped down the cliffside. It was the most damaging landslide on the Palos Verdes Peninsula since the 17th and 18th holes fell to the beach in 1999 from what’s now Trump National Golf Club.

A rising sea level would cause waves to break closer to the coastline and reach the bases of cliffs or bluffs more frequently, thereby increasing the rate of cliff retreat. According to one recent study, a 40” sea-level rise would accelerate erosion rates for southern California by 20 percent. The California Coastal Commission states that for gently sloping beaches, the general rule of thumb is that 50 to 100 feet of beach width is lost for every foot of sea-level rise.

Cliff and bluff erosion is not reversible. The most common response has been to armor the cliff base with rock revetments or seawalls. Ten percent (110 miles) of the California coastline is armored, including 33 percent of the coastline of the four most developed southern California counties: Ventura, Los Angeles, Orange, and San Diego. Despite this protection, coastal storm damage has increased over the past several decades because of intense development and several severe El Niño events. In addition, armored coastline ultimately reduces beach size.

“An armored coast blocks the natural sediment transport from the shore and in California we get a lot of sand on our beaches from creeks,” said Dana Murray, Heal the Bay’s Marine and Coastal Scientist. Thus, beaches cannot migrate landward, and continued flooding of the seaward beach results in a reduction in beach width, and its eventual loss entirely.

This also spells trouble for California grunions, which migrate to Pacific beaches, mostly from Punta Abreojos Mexico, to Santa Barbara, California every spring and summer. “The walls can diminish or even eliminate grunion spawning grounds,” said Melissa Studer, Project Director of the Grunion Greeter Project.

I think I’d be just a bit worried if the foundation of my multi-million dollar beach-front home was as laid bare and undermined as this. Wave action has removed all the supporting sand from around the footing of this home’s pier, exposing the wood piling underneath.

“Waves hit the wall and scour the sand out because they don’t have any where else to go, and as they keep hitting the wall, they bring all the sand back out,” Murray said. “So the beach gets eroded more and more. A rock revetment just makes the problem worse. Beach resident may stop it from going further, but in front of it, they’re losing the beach.”

Broad Beach residents want to restore their beach to its original width, and taxed themselves to foot a $20 million plan to borrow 600,000 cubic yards of sand. But these days they’re having trouble finding suppliers. Manhattan Beach has denied them sand from South Bay, so proponents of the privately-funded Broad Beach project are hoping to dredge sand off Dockweiler Beach. However, the Los Angeles County Department of Beaches and Harbors has objected, saying that the Broad Beach project would deplete reserves that might be needed later to replenish other public beaches eroded by rising sea levels.

If sea level increases substantially and wave heights continue to increase, over-topping will become more frequent. “Broad Beach’s rock wall is not supposed to last,” Murray said. “Even in their reports, they say they’ll last no longer than 5 or 10 years anyway because the rocks fall apart.” 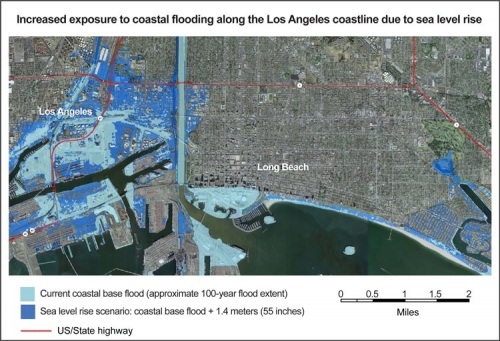 Global warming is producing rising sea levels worldwide. But how rapidly is sea level increasing off southern California and how will it affect us? Global sea levels are projected to rise as much as nine inches by 2030, one and a half feet by 2050 and four and a half feet by 2100. Most of this rise is expected to result from the melting of the Greenland and Antarctic Ice Sheets, which store the equivalent of nearly 200 feet of sea level. The onset of deglaciation which began 20,000 years ago slowed to a stop 2000 years ago, then resumed at modern rates sometime between 1840 and 1920. Since 2006, that rate has accelerated.

So far, sea level in Southern California has risen at a slower pace than the global level. However local sea-level increases are expected to surpass the global mean rise, increasing by one foot in 20 years, two feet by 2050 and as much as five and a half feet by the end of the century.

According to a 2012 report by by the National Research Council, that’s because much of California is sinking from the effects of an ice sheet that has long since disappeared. During the last ice age, an ice sheet depressed northernmost Washington, creating uplift around it. Since the ice melted, the flexure in the continental plate began to slowly release, causing uplift in northernmost Washington and subsidence in the rest of Washington, Oregon and California.

For the coast north of Cape Mendocino, tectonics offset that subsidence. Ocean plates are descending below North America at the Cascadia Subduction Zone, causing regional uplift along much of the Washington, Oregon, and northernmost California coast. Global Positioning System (GPS) measurements show this area is rising about 1.5–3.0 mm per year (or 5.9–11.8 inches each century).

However, south of Cape Mendocino in the San Andreas Fault Zone, tectonic plates move horizontally, creating little vertical motion. GPS measurements (which also measure compaction of wetland sediments, and/or fluid withdrawal or recharge), indicate this area is sinking at an average rate of about 1 mm per year (or 3.9 inches each century), though GPS-measured rates vary widely across locations. Records from 12 West Coast tide gauges concur ─ most gauges north of Cape Mendocino show that relative sea level has been falling over the past 6–10 decades, and most of the gauges to the south show that relative sea level has been rising.

Regional sea-level rise also varies due to local factors affecting the dynamic height of the sea, such as wind, air pressure, and surface-heating influence of climate patterns such as the El Niño/La Niña–Southern Oscillation (ENSO) and the Pacific Decadal Oscillation (PDO). These result in changes in ocean circulation on seasonal and multidecadal timescales that involve redistributing mass by altering the temperature and salinity of the upper ocean.

These climate patterns may also explain why California has not yet experienced the same sea-level rise as measured around the globe. Satellite altimetry, tide gauge, and ocean temperature measurements show a long-term increase in sea level off the U.S. west coast. According to Dr. Peter Bromirski’s 2011 study, trends along the West Coast ─ estimated from tide gauge measurements and confirmed by satellite altimetry since 1992 ─ signify relatively flat sea levels since about 1980. The study points to the Pacific Decadal Oscillation (PDO), which alternates between positive and negative phases. Presently in the positive phase, wind-driven ocean currents draw water away from the west coast and pull colder, denser water up from the depths (upwelling), depressing the sea level for the eastern Pacific. If the PDO shifts, as Bromirski suggests it may be doing, the associated wind patterns would shift, reducing upwelling, which could accelerate sea-level rise back to global rates or beyond.

Satellite altimetry records assessed by the Intergovernmental Panel on Climate Change (IPCC) also showed that sea level fell about 0–6 mm each year from 1993 to 2003 along the west coast. The IPCC suggested that the largest fraction of this short-term variation was caused by ENSO. But note that ENSO and the PDO do not act independently of each other. ENSO may play a significant role in decadal and longer sea-level variability. While ENSO can influence the PDO, the PDO can modulate tropical Pacific circulation as well as ENSO.

The largest waves have been getting higher and winds have been getting stronger in the northeastern Pacific, according to several observational studies. But wave and wind records go back only about 35 years, and to some extent reflect large El Niños and PDO fluctuations. If proven to be a long-term trend, the frequency and magnitude of extremely high coastal wave events will increase. But if not, sea-level rise will still magnify the impact of storm surges and high waves on the coast. What is currently defined as a 100-year flood today will occur much more frequently as sea level rises and the number of people exposed to risks from 100-year floods will increase substantially. We do have evidence from tidal gauges that tidal ranges are trending up in Southern California, mostly in La Jolla. Coincidentally, the occurrence of high sea level storm extremes has increased at La Jolla has increased 30-fold since 1933. Although Southern California so far has been spared a significant increase in sea level, expectations are that sea level will rise here faster in the coming decades.

1. Increased exposure to coastal flooding along the Los Angeles coastline due to sea level rise: Joe Abraham, adapted from map produced by the The Pacific Institute